A Purger’s Friend: The Fraternity House

This post is part of the #Purge365 series about a midlife journey through a year of purging a house – and a life – of unnecessary things. Click here to see all previous posts.

First off, apologies for the long radio silence.

I knew that summer would be a challenge for Project #Purge365. I was gone for almost a month traveling through Europe (see The Art of Travel: Temporarily Lost if you’re interested in those adventures) and did my best to work ahead, purging with a fury most of June. But despite my best efforts I’m still about a week behind.

The thing is, a changing scenery also changes your mind. You’re looking out the train window speeding through the French countryside, and things that might clutter your house back home seem not at all important. You’re strolling through the Gothic quarter in Barcelona with about 10,000 other people and don’t really want to return home at all. In fact, the AirBnb room you’re subletting from an Argentinian waitress and a Brazilian cook is windowless and about 100 degrees hot, and yet it’s absolutely perfect for you and your few possessions.

It’s a little bit hard to get back into the flow at home.

What gave me a jolt of newfound energy was the prospect of purging some big-ticket items.

It didn’t start in the best way. It started with more furniture making its way into our house, not out of it. Our oldest was moving back in with us, together with his IKEA bed and desk. After The Great Unpurging of this spring, I felt like I was battling windmills.

What to do with all the extra stuff?

Here is what I did:

1. Used the desk to make a new and orderly video game corner out of previous  game room chaos.

It’s a really old TV. In all honesty, I would love nothing more than making it my next #Purge365 item. But it serves one sole purpose. It is the only screen our old Wii connects to, and that old Wii has one game of interest: Mario Kart. Every Thanksgiving and Christmas when everyone is home, I invariably come across all four children camped out in the basement playing this game again and again for old times’ sake.

2. Replaced the ancient futon frame and mattress in my son’s room with the Ikea bed, something I had wanted to do for a long time.

But what to do with the old futon and mattress?

Our second oldest moved into the fraternity house at university this semester. It sounds a bit crazy, what with all the partying that goes on at fraternity houses everywhere, but he was actually looking for a bit of peace after a year in one of Knoxville’s loudest apartment buildings that also seemed to be the playground of Middle Tennessee’s entitled children.

He was looking for a sofa to put under his loft bed, presumably to make his room more presentable for would-be visitors. And no, I did not push that old futon on him in any way. But I won’t lie, putting those two together – his need for a futon, and my need to get rid of one – was one of the most enjoyable moments of the year for me. 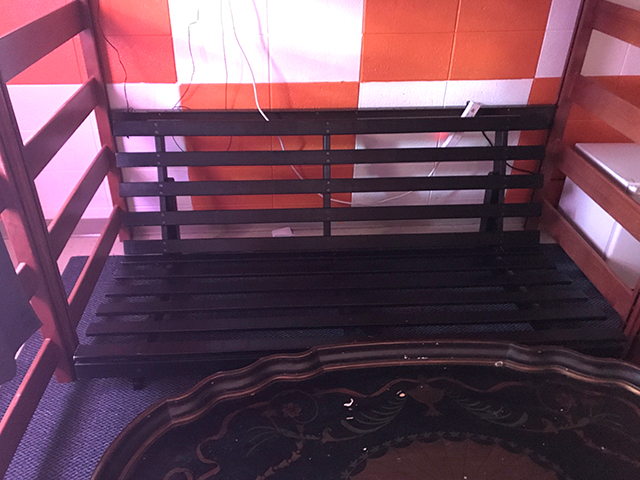 The mattress is still in transit hence the lack of it in this picture. 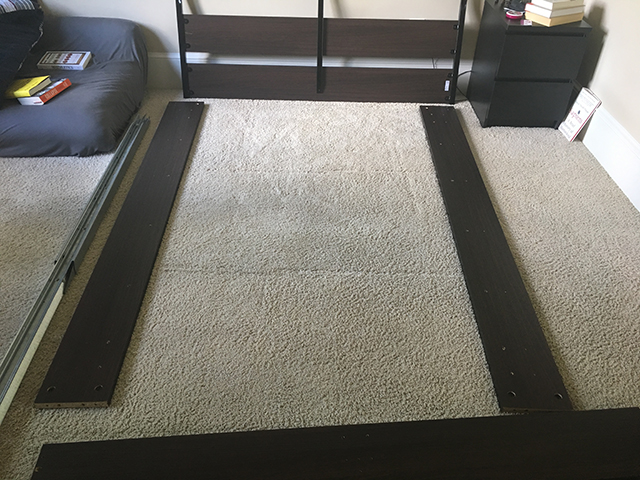 And yes, you are right, for this story to have a happy ending, the IKEA bed should be in an assembled state. I’m hoping the assembly instructions will turn up, or that someone remembers how it was done.

3. Took yet another old futon mattress and a really old IKEA Billy bookshelf to the dumpster

I told you this was my week of big ticket items. Having now settled the bed and futon situation for everybody, I felt it was time to get rid any other unused mattresses still in our house.

We got this particular futon mattress in 1991. It wasn’t even new then. We were poor students and bought it from other similarly poor students, so who knows how old this mattress really is. It served us well in those years, especially during a memorable road trip through the American West. We took the seats out the back of our old Ford Aerostar and the mattress became our bed during the glorious summer of 1993.

The bookshelf used to hold my old paperbacks somewhere in the basement. Most of the books weren’t worth keeping and I donated them to the library. Some of them I kept for the kids and put into another bookcase I had recently emptied and moved to the game room. If they ever get tired of playing Mario Kart, perhaps they’ll feel like reading a trashy novel. 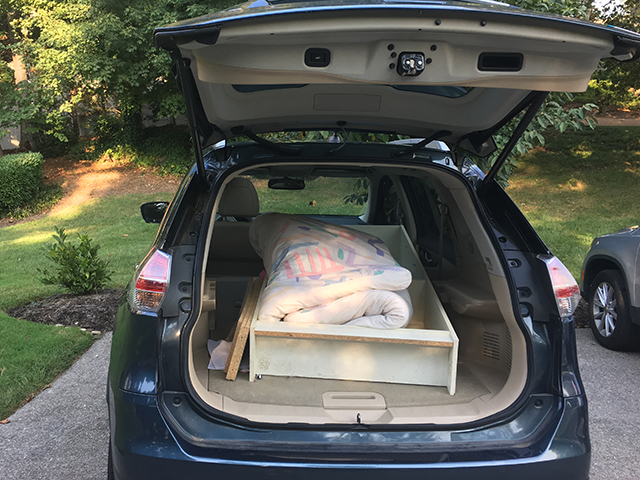 Before I go, I have some bonus material for you.

Do you know what a sweater shaver is? No? I didn’t either, until I recently asked the saleswoman at Lululemon for advice on some lint-covered leggings.

What followed was an even more enjoyable moment than the futon matchmaking. I would say  that seeing what a sweater shaver can do is nothing short of life changing!

It has nothing to do with purging. In fact, it makes you keep things you’d otherwise want to purge. But it is so deeply satisfying that you’ll have to buy one for yourself to see and feel it in action on your clothes. You’ll have a new spring in your step at the prospect of shaving bothersome lint off every garment you can find in your house, and your sofa on top of that.

Click here if you want to buy one for yourself!