Does the world really need THAT much Greek yoghurt? It’s bad enough that I can no longer top my breakfast muesli with Ayrshire low-fat yoghurt along with the Cape gooseberries I’d buy at Woolies every week. Back here in the U.S., I’ve made my peace with Stonyfield Farms low-fat yoghurt, not quite as nice but still okay, until today it was no longer on the grocery shelf. Gaaaah! Instead, it seems now my only choice are 18 varieties of Greek yoghurt. Give me a break! If the Greeks had been smart enough to license the word “Greek” on all the tubs of yoghurt lining America’s supermarket shelves, they’d be swimming in cash. Adieu Greek debt crisis, they could totally pay off German bankers with all that yoghurt revenue, and then some. I mean, how did Parma, Reggio, and a couple other Italian provinces pull off this coup that any parmesan cheese produced elsewhere cannot be called Parmiggiano? Leave it to the Italians to somehow have gained an unfair advantage. The Greeks, not so much. 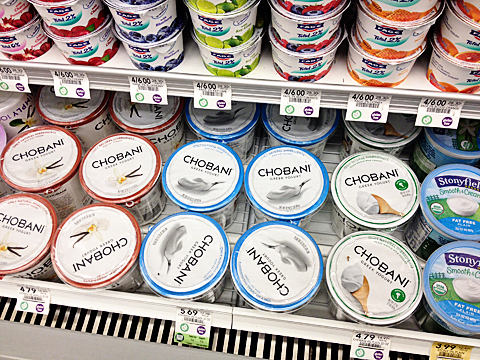 Our cat has succeeded to wrap us around his little paw. Remember Garfield? Findus is Garfield.

When I’m cooking in the kitchen, he materializes out of thin air even if up until that point he was at the other end of the neighborhood. He can hear the fridge open from the next county. Rises up on his hind legs, stretches his front paws, claws them into my legs, and sends me a Garfield-like thought bubble with “please feed me.” I’m sure lasagne would make him very happy, but he makes do with less. We’ve seen him eat potatoes. In fact, he might actually be a dog. Or a pig.

This is Findus’ bedtime routine: 1. Linger around the kitchen for scraps of food off the plates going into the dishwasher. If it’s winter, he’ll be doing the lingering right in front of the heating vent, letting hot air blow up his ass. 2. Slowly stroll upstairs into Sunshine’s room. 3. Fall asleep on the foot of her bed. 4. Snuggle up with her when she goes to sleep at 10 pm. Ever seen a cat spoon with a 13-year old? That’s exactly what it looks like. 5. At 12:30 pm, get a ride on my shoulder all the way down into the basement, purring loudly all the way. 6. Get tucked into a blanked on the guest bed and spend the rest of the night there. 7. Wait for door to be opened again next morning and head straight to the food bowl. If somehow I forget to do the nighttime transfer before I go to bed, the routine changes slightly. In that case, he’ll wake up Sunshine by loudly meowing from the inside of her door at precisely 5 am in the morning, waking up the whole house. Or, if the house doesn’t wake up quickly enough, he’ll open the bloody door himself by jumping onto the handle, which, trust me, wakes up the whole house too. What a life, huh? And he deserves all of this by hunting moles at a clip of one a day. Not that it’s making a dent. It’s a mystery our house hasn’t sunk down half a foot with all the tunneling that’s going on in our yard.

The higher you move in your tennis league, the more accurate the line calls become, and the less bickering. It’s just a law of nature. That’s the number one reason for me to practice like crazy and get better – to move out of the B leagues where opponents call each other the B word. I’ve heard it happen.

The second law of Nashville women’s doubles tennis: Let’s say you have the court till 11 am for your match. Let’s say you are up 6-4, 5-3 and 40-love in the match at 10:59. No other teams have shown up yet to take the court from you, so you have time to finish. Sure as hell  your opponents are going to argue that they have to urgently pick up a child from preschool at that precise moment and can’t possibly play even 5 minutes longer. Because of course they’ll want to count the match as a draw, not a loss, which surely would be sealed in the following 5 minutes. I’ve played countless opponents who’ve had all the time in the world while the match could have gone either way, yet suddenly have to rush away on some urgent business when the match is not looking in their favor.

When I take the girls shopping and they bring their own wallets to buy stuff, they never EVER use any coins. It’s as if those don’t exist, except they do, because they fill up the coin compartment of their wallets to bursting. But God forbid you’d actually have to add up a few coins to make up change for 23 cents. Oh no, so much easier to hand over 5 dollars and pocket the change. Into the already-stuffed coin compartment. I’m not sure why this bugs me so much, but it does. Whenever I point out that now might be a good time to lighten the load and slim down that wallet with the gratifying coin-purging I so frequently engage in myself, I get puzzled looks at best and a drawn-out eye roll at worst. As in “Mooooooom, you are so old-fashioned!” OMG, could it be they don’t actually know how to add up coins? In the same way they seem to have forgotten how to cross a road on foot, or how to ride a bike up an ever so slight incline?

No one can celebrate a rugby win – or loss, for that matter – with as many bottles of wine as a South African. And nowhere is good sportsmanship on display as much as on a rugby field. I mean, those guys clobber each other to death for about 80 minutes, leaving a trail of blood and patched up with stitches on their forehead, but as soon as that final whistle sounds, they are shaking each other’s hands, lingering with the opponent sharing a laugh, and praising the other team to no end in their postgame interview while insisting that their own team was just lucky to get the win.

How DO they get to the grocery store shelves in that perfect state of almost-ripeness – just yellow enough but still firm and fresh but not overripe? The minute I buy a bunch of bananas, they go downhill. If we don’t eat them within a day, they are awful. Brown-spotted skin and mushy on the inside. IfI refrigerate them, the skin turns black. How do they survive the long transport from wherever it is they grow? Do they refrigerate them and how come they don’t turn black on their watch? But if they don’t refrigerate them, how come they don’t ripen like they do within a day in my fruit bowl? It’s a mystery. I’m just glad someone has figured it out.

Germans might have Paulaner beer, an Oompah band, and the Hofbrau tent on the “Wiesen” in Munich every October, but Namibia gets the prize with zebra lederhosen.

But I digress. I have a book to write, it seems. Where was I?